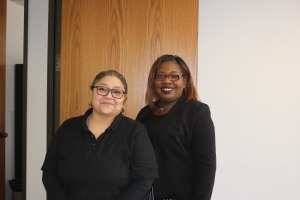 Miacole Nelson and Jeannette Castillo have been appointed to serve as Chief Stewards for the Cook County Clerk’s bargaining unit.

Miacole has worked as a Court Clerk for the Cook County Clerk’s Office for the past 21 years, based out of the Sixth Municipal District in Markham. She was a proud member of Teamsters Local 714, before the merge with Local 700, and served as a union steward for 10 years. Miacole also serves as a Trustee on the Teamsters Local 700 Executive Board.

“I am ready to embrace change and I’m excited to be a part of the new leadership at Local 700,” said Miacole. “I have a lot to learn, I am eager to get started and I vow to be the best representative I can be on behalf of all the Clerks that are part of this union.”

Jeannette also became a Court Clerk 20 years ago at the Cook County Clerk’s Office, based in the Law Division. She served as a union steward for 10 years and was Assistant Chief Steward for the bargaining unit in 2017. Jeannette was also a member of Local 714 and has always worked out of the Daley Center in Chicago.

“I was compelled to get involved because I have seen so many changes at the Clerk’s Office that need to be rectified,” said Jeannette. “I am excited to be here and am looking forward to working on our contract and making sure nothing falls through the cracks.”

“Both Miacole and Jeannette have always been diligent stewards and we are proud to elevate both of them into the Chief Steward role,” said Teamsters Local 700 Vice President Anthony L. McGee. “These women are strong, dedicated and intuitive members of the Clerk’s Office and we know they are going to be successful in their new positions.”

“Oh behalf of the Teamsters Local 700 Executive Board, please join me in welcoming both Miacole and Jeannette to the Local 700 staff,” said Teamsters Local 700 President Ramon D. Williams. “They bring a fresh perspective and new ideas and we know their tenacity will achieve many great accomplishments for the membership at the Clerk’s Office.”