Joint Council 25 Chaplain Willie Brand led the executive board members through their oath of service. 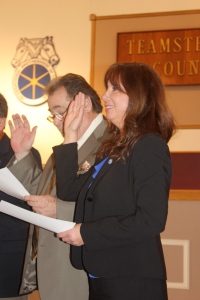 More than 100 Teamster delegates representing 27 local unions across Illinois and northwest Indiana re-elected the executive board on Nov. 3, 2015. The entire board ran unopposed and began another four-year term on Jan. 1, 2016.

President Coli praised the unity and perseverance of Joint Council 25 — one of the Teamsters Union’s strongest regional bodies and a thriving support system for more than 100,000 workers.

“Particularly in Illinois and Indiana, the Teamsters Union is better positioned and better equipped to defend the rights of working people than any other union,” Coli said. “The leadership that exists today within all of our regional local unions will pay dividends for hardworking Teamster members for years to come.”